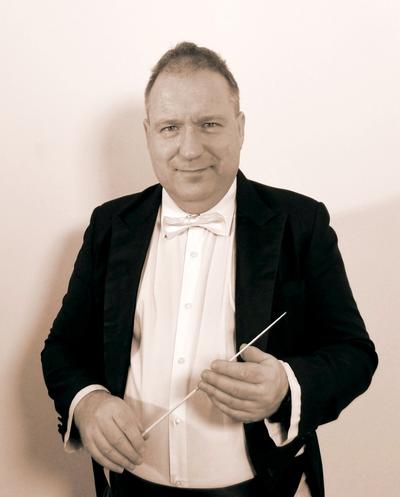 Boris Perrenoud, was born in Switzerland in 1966. Son of composer Jean-Frédéric Perrenoud, he began at the age of 6 to study the violin and gave his first concerts as soloist in Switzerland and abroad at the age of 10. He conducted his first concert at the age of 14 and he was chosen at age 17, to conduct the Boston Symphony Orchestra in Salzburg. At 19, he received his diploma of professional capacity in violin and music theory at the Neuchâtelois Conservatory. He continued his studies in the conducting class at the "Konservatorium der Stadt Wien, Privat Universität" (Austria) and obtains his diploma with distinction. He specializes at the Salzburg Academy, at the Institute of music of Tanglewood at the United States, by working under the direction of Leonard Bernstein, Ferdinand Leitner and Seiji Ozawa. He also collaborated with Herbert von Karajan, for audiovisual productions in Vienna. He is prizewinner of the "Verein der Freunde der Musikanstalten der Stadt Wien" and of the Kiefer-Habizel Foundation. He was chosen to conduct the Vienna Chamber Orchestra in the cycle "Young Talents" in the Vienna Konzerthaus, and won the 1st prize at the International Conducting Competition in Assisi. Since 1984, he is pursuing his international career, by being invited on the worldwide scale and by conducting hundreds of concerts, operas, radio and television broadcast with orchestras, such as: the Argentine Sympony Orchestra, the Cairo Symphony Orchestra, the Lausanne Chamber Radio Orchestra, the London Concert Sinfonia, the Mannheim Chamber Orchestra, the Palermo Massimo Theatre Orchestra, the Paris Sinfonietta Orchestra, the Polish Chamber Philharmonic Orchestra, the Vienna Chamber Orchestra, the Seoul Philharmonic Orchestra in the most prestigious concert hall such as, Golden Hall of the Musikverein in Vienna. 1992, he directed the choir of Jussieu in Paris with the soloists from the Opéra Bastille. 1993-1996, first guest conductor of the St. Petersburg Symphony Orchestra. 1996-1999, Music Director of the Moscow Philharmonic Orchestra. 1999-2007, he was appointed Professor at the University in Seoul, where he teaches the conducting doctorate class. 2005-2008, Music Director of the Curi Philharmonic Orchestra in Seoul. In 2008, he directed a series of concerts with the famous professional City Choir of Seoul. He is also regularly invited to give conducting masterclasses and to be a member of the jury of international music competitions. He has made many recordings for the major label such as SONY MUSIC and UNIVERSAL. The quality of the recordings has been identified by the international critics. He is regularly conducting the prestigious New Year Eve Concert of the Prague Philharmonic Orchestra. His latest DVD was given to Pope Benedict.

He is also the director of the Perrenoud Foundation in Switzerland, created in 1989 and of the World Music Competition, which recruits the best young artists from all around the world. He has produced classical music videos in the Berlin Konzerthaus, Rudolfinum in Prague and the Opera Royal de Oman (Dubai).