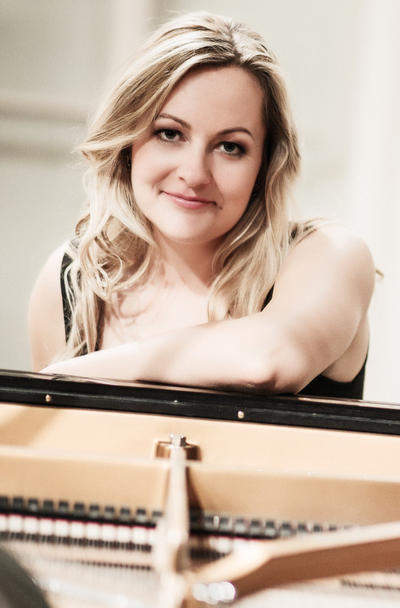 Daria Tschaikowskaja was born in Moscow. Coming from a musical family, she started playing piano at the age of six and enrolled in the Gnessin-Music-College for gifted children the following year.

In 1993 Daria made her debut concert with orchestra and enrolled in the Conservatory of Lubeck, Germany as a young student. In the same year she won the German Youth Musicians Competition, repeating the success in 1996 and 1999 in both junior and senior categories.

In 1996 Daria won the 1st prize at the Int. Steinway Competition in Hamburg.

1998 she became a student of Professor Wladimir Krajnew at the Conservatory of Hannover.

Throughout her career Daria has performed around Europe, Asia and Scandinavia at festivals such as Sakharov-Festival-Nijni Novgorod in Russia, Schleswig-Holstein-Festival in Germany, Cinema-Russe-Festival de Cannes in France, Kissinger Klavierolympiade, Kissinger Sommer, Festspiele Mecklenburg-Vorpommern and Internationale Musikfesttage Koblenz in Germany, Music Festival of Pitea in Sweden, Grieg Featival Troldhaugen in Norway and others and the honour to perform on famous concert stages as the Glasunow Hall in St.Petersburg, the Rachmaninow Hall and the Chamber Music Hall in Moscow, Konzerthaus Berlin, Laeizhalle Hamburg, Tonhalle Duesseldorf and the Philharmonies of Moscow and Cologne as soloist with orchestras (Kazan Philharmonic, Russian Philharmonic, German Youth Orchestra, Obninsk Philharmonic,Tver Philharmonic, Jarosslavl Philharmonic and other orchestras)and giving solo recitals.

In 1999 Daria enrolled in the Conservatory of Cologne, as a student of Professor Arbo Valdma. 2003 she was awarded 2nd prize in the Int. Piano Competition of Gorizia, Italy.

Daria graduated with a diploma from the Accademia Pianistica Imola, Italy (class of Prof. Boris Petrushansky) and also graduated with a diploma from the Conservatory of Cologne (class of Prof. Arbo Valdma) In 2005 she won 1st prize in the Int. Vincenzo Bellini Piano Competition of Caltanissetta, Italy and was to be heard as a soloist accompanying the Young Philharmony of Cologne on a Germany-wide tour. After that, she performed with many world class orchestras and conductors, among them Moscow State Philarmonic Orchestra, New Russian Orchestra, under Juri Bashmet and Maris Janssons.

Daria has completed her master degree at the Conservatory of Cologne, class of Prof. Pavel Gililov.